List of The Legend of Zelda: Link's Awakening glitches

The clothes glitch is exclusive to The Legend of Zelda: Link's Awakening DX. If Link defeats 90 enemies without leaving the overworld, the internal value associated with the 90th enemy may change his clothes. This remains until the glitch is performed again or the fairy queen is visited in the Color Dungeon. This glitch can overwrite palettes or corrupt The Travels of Link.[1] 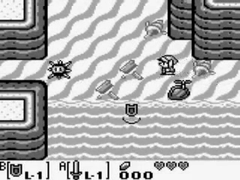 If the glitch is performed at Toronbo Shores, a L-0 Shield appears instead of Link's sword.

The screen warp glitch is one of the most well known glitches in the game. It allows Link to reach areas that are inaccessible via ordinary means. To perform the glitch, the player must move Link to the edge of a screen. By pressing the Select Button right as the screen starts to shift, Link warps to the other side of the following screen. If an item is visible as the player performs the glitch, it also copies over to the following screen. The glitch may result in Link getting stuck in a wall, tree, or another object; performing the glitch may also corrupt the save data. The screen warp glitch often results in sprites being carried over to another side of the screen.

The screen warp glitch was fixed for The Legend of Zelda: Link's Awakening DX and later revisions of the original Game Boy version.