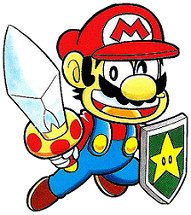 Triforce Wiki was founded from a community of Mario fans

Triforce Wiki is a The Legend of Zelda wiki created by Results May Vary (no longer with us) at the request of Doc von Schmeltwick, both editors from the Super Mario Wiki. It is made to directly compliment the Super Mario Wiki in both layout and design. This coincidentally reflects how the development team is shared between the Super Mario series and The Legend of Zelda series, both of which they concurrently worked on for years. Triforce Wiki welcomes any form of constructive editing, both big and small.

Since April 30, 2019, Triforce Wiki has been independently hosted on zeldawiki.info. Results May Vary would have preferred the domain name zeldawiki.com, but it was too expensive on the domain market, and Results May Vary could not afford it. The .info top-level domain was a second option in response to how some of the NIWA wikis (such as wikibound.info and starfoxwiki.info) had the top-level domain.

A few months later, on June 11, 2019, Zeldapedia (zelda.fandom.com) integrated its community into Zelda Wiki, and Zeldapedia was permanently closed to editing and became a read-only archive. Triforce Wiki is the most similar in style to Zeldapedia (and even shares a compatible CC-BY-SA license). Since Zeldapedia's closure, Triforce Wiki became more distinctive from the other Zelda wikis.

On December 9, 2021, Triforce Wiki (along with its sibling wiki, Wiki of Mana) has moved its hosting to Grifkuba Gaming Services, and its domain has been changed to triforcewiki.com. This is because the original host was slow, often gave connectivity issues, and because Results May Vary could not afford a better hosting solution. He agreed to make Doc von Schmeltwick the new proprietor for his long-term commitment to Triforce Wiki. Results May Vary would later move to other projects for personal reasons.

Following the August 2022 forking of zelda.fandom.com into the independent zeldapedia.wiki, the new Zeldapedia and Triforce Wiki agreed to remain separate due to differing views on coverage, but are on good terms.

Triforce Wiki is named after the Triforce, a signature relic from The Legend of Zelda games. Other wiki names (such as Zeldapedia and Zelda Wiki) were taken, so Results May Vary struggled to find an original name that mentioned Zelda in the title. He thought of Zelda Encyclopedia as a possible name but then quickly dismissed it due to the ambiguity with Zeldapedia and Zelda Encyclopedia.