Relevance to The Legend of Zelda series[edit] 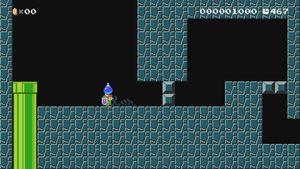 Link holding a bomb in an underground level.

While in this form, Link can attack using his sword; if the player presses the run button, he slashes forward. Link can charge up and perform a dash attack, causing him to run straight forward with his sword out until he hits a wall. A downwards thrust can be performed by pressing the down button in mid-air. Link can shoot arrows with his bow and throw bombs, which can explode certain blocks.

The Master Sword power-up changes some of the game's sound effects and background music to ones from The Legend of Zelda. When collected, it plays the "item collected" sound. When a level is completed, the song from when Princess Zelda is rescued plays at a slightly slower speed. At the end of castle-themed levels, Link holds a piece of the Triforce as the "Triforce collected" sound. The death music plays if Link falls into a pit.

The background music changes to the overworld theme from The Legend of Zelda while using the Master Sword. In underground and Ghost House-themed levels, the dungeon music plays. The Death Mountain music can be heard in airship and castle levels. The boss music sound effect is replaced with the battle theme from the Family Computer Disk System version of Zelda II: The Adventure of Link, while Shadow Link's battle music plays as final boss music. The bonus music plays an original composition based on the horse racing music from The Legend of Zelda: Ocarina of Time.

An official Nintendo-created course titled "The Speedventure of Link" was released as part of the Ninji Speedruns mode on December 19, 2019. It is themed around the Master Sword power-up and Link's unique abilities.

Super Mario Maker 2 on other wikis: