Link: The Faces of Evil

Link: The Faces of Evil is a video game released for the Philips CD-i in 1993. It was developed by Animation Magic and published by Philips Media alongside Zelda: The Wand of Gamelon. The Faces of Evil is very similar to The Wand of Gamelon in aspects, except that it features different main characters, plot, enemies, and level design. Both games, as well as Zelda's Adventure, are the only The Legend of Zelda games where Nintendo was not involved in the their development.

While both games initially received mixed reviews, they are infamous for their extreme negative reception in contemporary reviews and retrospectives, and they are often considered the worst games in The Legend of Zelda franchise, as well as some of the worst games of all time. The CD-i games were ambiguously disowned from the franchise by Eiji Aonuma.[1] 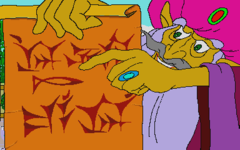 Gwonam reads a scroll, saying Link is the only person who can defeat Ganon

The story begins in Hyrule Castle where Link complains to King Harkinian about being bored. They both discuss the prospects of new adventure. Soon, Link's hopes are fulfilled as Gwonam arrives on a magic carpet and tells them that Ganon has taken over the island of Koridai. Gwonam explains that according to a prophecy, only Link can stop him. Link is flown to Koridai on Gwonam's magic carpet, and the wizard shows him the island's giant stone statues, collectively known as the Faces of Evil, which Link must conquer.

Questing to rescue the Princess and to liberate Koridai, Link proceeds to defeat Ganon's minions; Goronu, Harlequin, Militron, Lupay, and Glutko, from whom the Book of Koridai is retrieved. Aypo is capable of reading the book, and says that the Book itself is enough to defeat Ganon. Along the way, Link is sent by Suprena to Fortress Centrum to retrieve the "Treasure of Death". At the fortress, Link finds what appears to be a sleeping Zelda. Once awakened, however, the figure transforms into a resurrected Goronu. After defeating the sorcerer, Link retrieves the Crystal of Reflection, allowing his shield to reflect curses.

After trekking through Ganon's Lair, Link finally reaches Ganon, who attempts to recruit Link with the promise of great power and the threat of death. Link throws the Book of Koridai to defeat Ganon, and then he awakens the real sleeping Princess Zelda. Gwonam appears and congratulates Link on imprisoning Ganon. He shows Link a recovering Koridai and declares him the island's hero. Link asks Zelda for a kiss, which she refused. 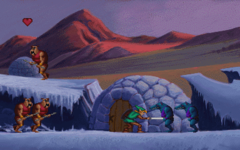 The player plays as Link. At the start of Link's quest, there are three areas which are initially available and accessible through Gwonam's map. The player can access each area by moving the on-screen cursor over it and press Button One to select it.

Similar to Zelda II: The Adventure of Link, Link: The Faces of Evil features side-scrolling gameplay. Link is equipped with both a sword and a shield at the start (even though Gwonam tells him that he only needs a sword). The sword is used to attack enemies and fire power blasts, and the shield can deflect attacks from enemies. The shield automatically lifts when the player is standing still or crouching. Link can purchase other useful items at Morshu's store, including lamp oil, ropes, and bombs. The game uses "rubies" for currency, which Link can obtain from defeating enemies.

Link's health is measured in Life Hearts, which is displayed at the upper-left corner during gameplay. Link has three Life Hearts by default, but he can later obtain more. For each time that Link is injured, he loses as low as half of a Life Heart. When Links loses all of his Life Hearts, he earns a Game Over. For the first two Game Overs, the player is provided with an option of continuing from the entrance that Link entered the area from. When Link loses his Life Hearts a third time, he is returned to the map, and the player is forced to restart the level.

These are items that can be accessed from Link's inventory:

These are items that cannot be used from the inventory:

There are some items that Link must trade with other characters:

The only weapons used by Link are a sword and a shield, both of which have at least one upgrade:

Link: The Faces of Evil takes place entirely on Koridai, a mountainous and volcanic island. A land map is used to travel between certain regions.

Three locations are initially available at the start of the game; Crater Cove, Goronu, and Nortinka. More locations are unlocked after hitting the Triforce Map at the end of specific stages.

The Faces of Evil are large, labyrinthian busts of Ganon and his minions, carved into the mountains of Koridai. Link must conquer each Face by defeating its owner and likeness. Almost every Face has a unique item acquired within it.

In 1989, Nintendo signed a deal with Sony to begin development of a CD-ROM-based system known as the "Nintendo Play Station" (or the "SNES CD") to be an add-on to the Super Nintendo Entertainment System that would allow for FMV and larger games. However, Nintendo broke the agreement and instead signed with Philips to make the add-on, which caused Sony to spin off their add-on into its own console called the PlayStation.[2] Witnessing the poor reception of the Sega Mega-CD, Nintendo scrapped the idea of making an add-on entirely. As a compromise, Nintendo gave Philips permission to use some of their Zelda characters on their console, the Philips CD-i.

Contracting out to independent studios, Philips subsequently used the characters to create three games for the CD-i. According to an interview with Dale DeSharone, Nintendo was not involved in the development except for providing input on the character designs.[3] Philips insisted that the development studios utilize all aspects of the CD-i's capabilities, including FMV, high-resolution graphics, and CD-quality music. Philips served as the publisher and was barely involved with development. Dale believed that Philips would disapprove of a top-down view similar to the original The Legend of Zelda, which he stated would have "looked old, and (would not) make use of the CD-i capabilities."

The Faces of Evil and The Wand of Gamelon were showcased at the 1993 CES, where audiences were surprised with their degree of animation.

The Faces of Evil, along with The Wand of Gamelon, are the first two Nintendo-licensed games released on the Philips CD-i.[4] They were given the relatively low budget of approximately $600,000, and the development deadline was set a little over a year—time which would have to be split between the both games.[5] The developer, Animation Magic, decided that both games would be developed in tandem and share a graphics engine to more efficiently use the budget.[6]

The rest of the development team included three programmers (all previous employees of Spinnaker Software), one musician (Tony Trippi) and freelance writer Jonathan Merritt, who created the scripts and designs. Under DeSharone's direction, game development progressed similarly to that of his earlier-directed title, Below the Root, a game which Retro Gamer's John Szczepaniak has suggested may have served as a forerunner of sorts. Background designs were created by local Cambridge artists.[5]

The animated cutscenes were created by a team of four animators from Russia, led by Igor Razboff, who were flown to the United States for the project. These games marked the first time that Russian outsourcing had been utilized by an American company – a move that was only possible due to the somewhat thawed political climate after the fall of the Berlin Wall.[5]

At the time of its release, contemporary criticism was largely positive to mixed for both games. SNES Force magazine described the animated sequences as "breathtaking" and praised the game for its high-resolution graphics and its "brilliant" use of sound and speech. Highly anticipated by the French video game press, Joystick magazine's development preview of The Faces of Evil described it as a veritable arcade-quality game with stunning graphics and "perfect animation". The same magazine would ultimately score The Faces of Evil 79%, a few months later, giving particularly high marks for music, sound effects and play-through time.

Despite the largely negative reception that the games have received, there have been a few positive reviews. Both Danny Cowan of 1UP.com and John Szczepaniak of Hardcore Gaming 101 praised Faces of Evil and Wand of Gamelon as among the best games on the CD-i. Szczepaniak in particular suggested that several of the magazines that had rated and reviewed Wand of Gamelon and Faces of Evil had engaged in hate campaigns having never even played the game.[5] Their praises drew from the games' detailed, well-drawn in-game backgrounds (which was described as both Gigeresque and Monet-esque) and "pretty decent" gameplay, although both criticized the controls.[6][4] According to Szczepaniak, the games' controls work best when played with a hardwired three-button CD-i control pad, as opposed to the CD-i's "crappy infra-red remote".[6]

In a periodical for Retro Gamer magazine, Szczepaniak identified the natural comparison of the games by reviewers to the quality of games in the rest of the Zelda series as an improper comparison to make and suggested that when reviewed in their own right, the games were actually excellent. In contrast with the mainstream criticism, Retro Gamer described the games as "astoundingly good" and rated them together as number ten in its "Perfect Ten Games" for CD-i. Both games were even praised for exhilarating pacing and superb gameplay design.

Other publications gave more negative reviews. CDi Magazine rated The Faces of Evil 65%, stating that the game was a poor relation to the original Nintendo games and singling out the perfunctory storyline, the lack of graphical features like parallax and the slow and repetitious gameplay. Another reviewer for the magazine gave The Wand of Gamelon a higher 75% and called it a "reasonably good game" for its puzzles and animated sequences. He however criticized its plot and controls. In 1994, Edge reported that as CD-i sales began to suffer, criticism sharpened and the games were described as low-cost, low-risk ventures that had failed to excite any interest in the platform.

Criticism has been directed towards numerous aspects of both games, including its unresponsive controls, repetitive gameplay, its cutscenes, and voice acting. The cutscenes in particular are popular targets of derision, most often in YouTube Poop videos.

Wired magazine said that the animation in both games was extremely simple and stilted and that the graphics had several glitches. The designers were criticized by IGN's Travis Fahs for using a style similar to Zelda II: The Adventure of Link for the games and for "insufferable" controls and the designers' poor understanding of The Legend of Zelda franchise. However, he noted that the backgrounds looked decent considering the poor design of the CD-i's hardware.

The games' soundtracks drew mixed responses. Zelda Elements felt it was "average" and not up to the usual Zelda quality, while IGN described the soundtrack as "redbook audio CD pop". However, this has been contested by other reviewers, who described it as diverse, high-quality and superb with an adventurous upbeat tempo blending "delicious '80s synth", electric guitar, panpipes, marimbas and other unusual instruments.

Link: The Faces of Evil on other wikis: