Super Smash Bros. is the first installment of the Super Smash Bros. series, released for the Nintendo 64 in 1999. The game has some The Legend of Zelda content, and Link is one of the playable characters.

Relevance to The Legend of Zelda series[edit] 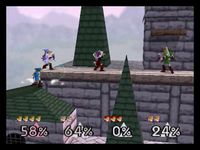 The four Links fight on the Hyrule Castle stage

Link is one of the eight default characters, playable from the start of the game. His appearance and moveset is based on his appearance in The Legend of Zelda: Ocarina of Time. Like other fighters, Link has three other costumes aside from his default one. The only difference between Link's alternate costumes is the color of his tunic: red, blue, or lavender each.

Hyrule Castle appears as Link's home stage, and is set on the castle rooftop. The only unique stage feature are whirlwinds, which occasionally appear. If a character is caught in the whirlwind, they are sent upward.

Heart Containers appear as an item. When a fighter picks up one, their health is fully restored.

Super Smash Bros. on other wikis: