Zelda: The Wand of Gamelon

Zelda: The Wand of Gamelon is a video game released for the Philips CD-i in 1993. It was developed by Animation Magic and published by Philips Media alongside Link: The Faces of Evil. The Wand of Gamelon is very similar to The Faces of Evil in its gameplay, though the player controls Princess Zelda rather than Link. Both games, as well as Zelda's Adventure, are the only The Legend of Zelda games where Nintendo was not involved in the their development.

While both games initially received mixed reviews, they are infamous for their extreme negative reception in contemporary reviews and retrospectives, and they are often considered the worst games in The Legend of Zelda franchise, as well as some of the worst games of all time. The CD-i games were ambiguously disowned from the franchise by Eiji Aonuma.[1] 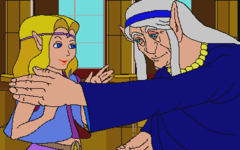 Impa comforts Zelda after the Princess worries for her father, King Harkinian

King Harkinian announces his plan to aid Duke Onkled, the ruler of Gamelon, after the island nation falls under attack by Ganon's forces. Zelda is worried for his safety, so the King orders her to send Link for backup in case he does not return from his mission within a month. A month passes without word from the King, so Zelda sends Link to find him.

When he too goes missing, Zelda ventures off to Gamelon (accompanied by the elderly Impa) to find both Link and the King. In the town of Sakado, Impa discovers that King Harkinian was captured and that Link had engaged in a battle, the outcome of which is unclear. As she adventures across the island, Zelda meets many friendly characters and battles with many monsters including Gibdo and Iron Knuckle. Along her travels, Zelda battles the sorcerer Wizzrobe to free Lady Alma, who gives Zelda a canteen that she claims Link gave her in exchange for a kiss.

On reaching Duke Onkled's palace, Domodai Palace, it is revealed that Duke Onkled has betrayed the King and is working for Ganon. Zelda storms the palace, kills Hektan, and saves the imprisoned Lord Kiro who used to work for the King. Kiro reveals the secret entrance to Onkled's chamber, and when they confront him he reveals the entrance to Reesong Palace, where Ganon has taken residence.

Zelda travels to the Shrine of Gamelon to defeat the head-switching chimera Omfak and obtain the Wand needed to defeat Ganon. She also visits Nokani Forest to obtain a magic lantern needed to clear the darkness around Ganon. Finally at Reesong Palace, Zelda fights Ganon, incapacitates him with the Wand, and rescues her father. Back at Hyrule Castle, Duke Onkled is turned over to the King, begging for mercy. He is arrested and punished by the King by scrubbing "all the floors in Hyrule". Although Link's whereabouts are still unknown, a comment by Lady Alma prompts Zelda to throw her mirror against the wall, and as it smashes Link magically materializes, seemingly having been trapped in the mirror. 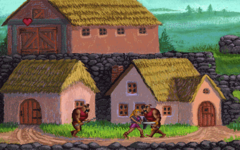 Zelda exploring one of the opening areas, Kobitan.

The gameplay is very similar to the accompanying title, Link: The Faces of Evil. The player controls Princess Zelda, who must find and defeat Ganon and rescue both King Harkinian and Link to become the heroine of Gamelon. The weapons, a handful of the items, and most of the enemies are the same as in Link: The Faces of Evil, although the trading items, characters, and bosses are different. When the player begins this quest, three areas are initially available, accessible through Impa's map. The player can access each area by moving the on-screen cursor over one on the map and then pressing Button One.

At the beginning of the game, Zelda is only equipped with a sword and shield. The sword is used to attack enemies and to fire deadly power blasts, and the shield can deflect projectile attacks thrown at the player. The shield is automatically lifted when the player is standing still or crouching. Other helpful tools, such as lamp oil (for lighting a lamp), rope (for climbing) and bombs (which can destroy some obstacles) are available for a price at the general store in Sakado. The rubies that the Merchant takes as currency can be obtained by defeating enemies, and are also needed to use certain items.

Like The Faces of Evil, Zelda's health is also measured by Life Hearts. By running out of Life Hearts the first two times, the player is provided with the option to continue from the entrance that Zelda entered the current area from. The player is forced to restart the level if Zelda loses all her Life Hearts a third time.

These are items that can be used from Zelda's inventory:

These are items that cannot be used from the inventory. They are the exact same as in Link: The Faces of Evil:

There are some items that Zelda must trade with other characters, entirely different from those in Link: The Faces of Evil:

Just like Link: The Faces of Evil, Zelda can only use a sword and shield as an equipped weapon, which have at least one upgrade.

Zelda: The Wand of Gamelon takes place entirely on Gamelon, a lush island with several towns, palaces, and forests. A land map is used to travel between certain regions.

Three locations are initially available at the start of the game; Aru Ainu, Kobitan, and Sakado. More locations are unlocked after hitting the Triforce Map at the end of specific stages.

The Wand of Gamelon shares a nearly identical development story to Link: The Faces of Evil, as both games were developed in tandem by Animation Magic and saw a simultaneous release. Together, they were the first Nintendo-licensed games to be released on the Philips CD-i.

With the relatively low budget of approximately $600,000, Wand of Gamelon was given a little over a year for completion — time which would have to be split between the development of Wand of Gamelon and Faces of Evil. It was decided by Animation Magic, the Cambridge, Massachusetts-based development team led by Dale DeSharone, that the two games would be developed in tandem and would share the same graphics engine to more efficiently use the budget.

The voice of Princess Zelda was provided by Bonnie Jean Wilbur and the voice of Link by Jeffrey Rath, while additional voices were provided by Jeffrey Nelson, Mark Berry, Natalie Brown, Karen Grace, Josie McElroy, Marguerite Scott and Paul Wann.

At the time of its release, contemporary criticism was largely positive. SNES Force magazine described the animated sequences as "breathtaking" and praised the game's high-resolution graphics and "brilliant" use of sound and speech. Highly anticipated by the French video game press, Joystick magazine's development preview of the title highlighted the fact that this would be the first of the Zelda games to feature true voice acting, and described its plot as highly original and the background graphics as a tableaux of great beaut.] The UK-based CDi Magazine rated the game a 75%, describing it as a "reasonably good game" and praising the puzzles and the animation sequences while criticizing its perfunctory plot and poor controls. In 1994, Edge reported that both Faces of Evil and Wand of Gamelon had sold a "respectable number of units", but as CD-i sales began to suffer criticism sharpened and the games were described as low-cost, low-risk ventures that had failed to excite any interest in the platform despite their sales figures.

All three Zelda CD-i titles have garnered a largely negative reception among modern critics, with The Faces of Evil and Wand of Gamelon standing out as the most frequently derided. The magazine Electronic Gaming Monthly ranked Zelda: Wand of Gamelon the sixth worst game of all time, and GameTrailers rated it fifth worst game of all time. The Star Tribune described the game's voice acting as "laughable" and it was also criticized by Zelda Elements as jarring. IGN described the games as "infamous" and "cheesy"; other reviewers called the animated cutscenes "freakish" and "an absolute joke". Wired magazine said that the animation on the first two Zelda games was extremely simple and stilted and that the graphics had several glitches.

Despite the largely negative reception of The Wand of Gamelon, there have been a few positive reviews as well. Both Danny Cowan of 1UP.com and John Szczepaniak praised Faces of Evil and Wand of Gamelon as among the best games on the CD-i. Szczepaniak in particular suggested that several of the gaming magazines that had rated and reviewed Wand of Gamelon and Faces of Evil had engaged in hate campaigns having never even played the game. Cowan's and Szczepaniak's praises drew from the games' detailed, well-drawn in-game backgrounds and "pretty decent" gameplay, although both criticized the controls.

While the audio was thought to be "average", and not up to the usual Zelda quality by some reviewers, this has been contested by others who have described it as diverse and high-quality with an adventurous upbeat tempo blending electric guitar, panpipes, marimbas, and other unusual instruments. In a periodical for Retro Gamer magazine, Szczepaniak identified the natural comparison of the games by reviewers to the quality of games in the rest of the Zelda series as an improper comparison to make and suggested that when reviewed in their own right the games were actually excellent.

Contrary to what were described as "lies perpetuated about [Faces of Evil and Wand of Gamelon]," Retro Gamer described these games as "astoundingly good" and rated them together as number ten in its "Perfect Ten Games" for CD-i. While acknowledging that the games lacked canonicity, the games were praised for exhilarating pacing and superb gameplay design and music. The game's background art was also described as ranging from Gigeresque to Monet-esque.

Zelda: The Wand of Gamelon on other wikis: