The Legend of Zelda: A Link to the Past

The Legend of Zelda: A Link to the Past is the third installment of The Legend of Zelda series. It was first released on the Super Nintendo Entertainment System, starting with Japan in late 1991 (on the Super Famicom) and then overseas the folowing year, 1992. The story is about Link, who goes on a journey through two realms, the Light World and the Dark World, to save Hyrule and the kidnapped maidens from Ganon.

The game returns to a top-down perspective like the first The Legend of Zelda game, thereby abandoning the side-scrolling gameplay of Zelda II: The Adventure of Link. Several series staples such as parallel worlds and the Master Sword were introduced in The Legend of Zelda: A Link to the Past.

It has been requested that this section be rewritten.

The introduction chronicles the Imprisoning War, which occurred many years before the events of the game. It describes Hyrule as a beautiful kingdom surrounded by forests and mountains, and tells of an omnipotent golden power that lies hidden in the Sacred Realm, a place which cannot normally be entered by mortals. However, a dark portal to the Sacred Realm opened, causing many people to quarrel and fight each other. While many men entered the Sacred Realm, none returned. Instead, an evil power began to issue forth from the dark portal. During the main story, it is discovered that the source of the evil power is a lowly thief named Ganondorf, who got his hands on a golden power named the Triforce, turning the Sacred Realm into the Dark World. The king commanded the Seven Sages to seal the gate to the Sacred Realm. Many knights had perished in the battle to protect the sages from the evil, but eventually, the seal was cast on the portal. The evil ceased to flow, and the portal was sealed.

Many years later, a mysterious wizard known as Agahnim appeared as if from nowhere, using his magic to vanquish the King of Hyrule and take over Hyrule Castle. In doing so, he cast a spell on the knights of Hyrule, forcing them to obey him and kidnap seven maidens, whom he intended on using to break the seal by making each of them disappear into the Dark World. Agahnim manages to send six of the maidens into the Dark World, leaving only the final descendant, Princess Zelda. Agahnim has also captured Zelda, but plans to send her into the Dark World to complete the destruction of the seal. 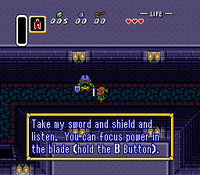 Link finds his uncle in the basement of Hyrule Castle, and is given a sword and a shield.

At the beginning of the game, a young boy named Link is awakened by a telepathic message from Princess Zelda, who says that she is locked in the basement of Hyrule Castle. As the message closes, Link's uncle goes to rescue her, telling Link to remain in bed. However, Link ignores his uncle's command, and goes to Hyrule Castle as well. He goes to Hyrule Castle and finds an underground passage in the courtyard. Link travels down it, and he finds his uncle in the hallway, severely wounded. Before passing out, Link's uncle tells gives link a sword and a shield, instructing him to rescue Zelda, and teaches him the Spin Attack technique. Link navigates the castle and rescues Zelda from her cell. Zelda guides Link to the throne room, where they take a secret passage through a sewer that leads to a sanctuary.

Link is told by a sage that Agahnim is planning to break the seal by sacrificing the seven maidens; the only thing that can defeat him is the Master Sword. He tells Link to visit the house of Sahasrahla, a wise man known to reside in Kakariko Village, marking the location on his map. By the time Link leaves the Sanctuary, the storm and rain clouds have vanished, yielding to clear skies. It also becomes evident that Link is wanted for kidnapping Princess Zelda. Once Link arrives at the wise man's house, he finds only the wise man's wife present, and she tells Link that her husband left the village when Agahnim took control of Hyrule Castle. Link talks to a boy, who tells Link that Sahasrahla is hiding near the East Palace, and marks the exact spot on his map. Link heads east, and arrives at a house where Sahasrahla is staying. Sahasrahla tells Link about the Master Sword, and instructs him to return with the Pendant of Courage from the East Palace.

Link makes his way to the East Palace. There, he solves a variety of puzzles, and eventually finds a Big Key, which unlocks not only the chest containing the Bow, but also the door leading to the lair of the palace's boss. Once he reaches the boss' room, he finds six large, blue statues called Armos Knights, which, sensing the presence of someone in the room, become animate and proceed to engage in battle with Link. After he defeats the Knights, Link takes the Pendant of Courage and exits the palace. He shows the pendant to Sahasrahla, who tells him that retrieving the Pendants of Virtue—Courage, Power, and Wisdom—and taking them to the Lost Woods allows Link to draw the Master Sword from its pedestal therein. Before Link leaves, Sahasrahla gives him the Pegasus Boots and tells Link of a helpful item to the east of Lake Hylia. He marks the locations of the other two pendants—one in the Desert Palace, and the other in the Tower of Hera at the top of Death Mountain—and the Master Sword on Link's map.

After acquiring the three pendants, Link returns them to the resting place of the Master Sword in the Lost Woods. Unfortunately, just as Link draws the sword from its pedestal, Zelda contacts him telepathically to call him urgently to Sanctuary because the Hyrule Castle soldiers have just arrived there. Link arrives at Sanctuary moments after the Soldiers have vacated it, where he learns from the dying sage that Zelda has been removed to Hyrule Castle. Link goes to rescue her, but arrives too late; Agahnim sends Zelda to the Dark World. Link defeats Agahnim in battle, but is also sent to the Dark World.

The Dark World is where Ganon has been imprisoned by the elders of the light world and, once he has managed to capture the maidens in crystals (thanks to Agahnim's work), he is also able to harness their power to "break a path through to the light world" where, with the power of the Triforce, he will be able to rule both worlds.

Once in the Dark World, Link finds himself standing atop the Pyramid of Power where Hyrule Castle stands in the Light World (as the two worlds are essentially parallel dimensions). To restore the Sacred Realm (now the Dark World) and save the once-peaceful Hyrule (a.k.a. the Light World), Link must rescue the seven maidens from dungeons scattered across the Dark World, defeat Ganon, and reclaim the Triforce.

Once the maidens have been freed, they use their power to break the barrier around Ganon's Tower, where Link faces reincarnations of the first three bosses: The six Armos Knights, the three Lanmolas (sand worms), and the Moldorm (a giant Worm), and of course, meets Agahnim again. After Link defeats Agahnim the second time, a bat rises up from Agahnim's clothes and flies off, crashing into the Pyramid of Power. As Link arrives at the Pyramid (using the bird he can eventually summon after he obtains the flute), he drops down into the hole made by the bat to find that the bat is none other than the evil Ganon, who can only be defeated using Silver Arrows. After Ganon's demise at Link's hands, Link touches the Triforce and is granted the most noble wishes of his heart, among them, the Dark World to return its former glory as the Sacred Realm, peace to return to the Light World, his uncle to be healed, and all to be restored as it was. His quest completed, Link returns the Master Sword to its resting place.

It has been requested that this section be rewritten and expanded to include more information. 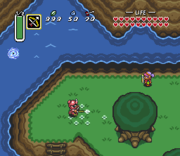 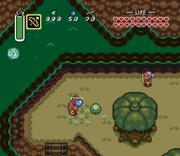 The game introduces items and equipment that would become common throughout The Legend of Zelda series, most notably the Master Sword. The game also introduces Link's Spin Attack technique. Heart Containers make a returning appearance, but many are split into Pieces of Heart, and Link can collect four of them to make a Heart Container, adding a heart to his life bar. All dungeons are multi-level, requiring Link to walk between floors and sometimes fall through holes to land on lower levels. Control of Link was made more flexible than in previous games, as he can walk diagonally and can run with the aid of the Pegasus Boots. Link's sword attack was improved to swing sideways instead of merely stabbing forward; this gives his sword a broader range and makes combat easier.

These are items that Link can obtain more than once.

These are some usable items and weapons that Link only obtains once.

There are items that Link can only obtain in the dungeons.

There are some items that Link can store inside a Magic Bottle.

Aside from a heart, another special item is rewarded at the end of each dungeon. The Light World dungeons reward a Pendant while the Dark World ones reward a crystal.

Link is permanently equipped with these items once he obtains them. If Link obtains a new sword or shield, it replaces the one that he was previously equipped with.

The game's overworld takes place in both the Light World and the Dark World. From a birds-eye view, they have a similar layout, though the locations, namely the dungeons, are different.

These are the dungeons of the Light World:

These are the dungeons of the Dark World:

For this game's image gallery, see Gallery:The Legend of Zelda: A Link to the Past.