Twilit Fossil Stallord, or simply Stallord, is the fourth boss in The Legend of Zelda: Twilight Princess and the final boss of Link's Crossbow Training. In its debut appearance, Stallord is fought in the boss room of Arbiter's Grounds, where Link encounters it at a large pit of quicksand.

Stallord is a massive skeletal being with two horns on its head. Stallord appears to only have an upper half of a body. When it is active, Stallord's pupils are glowing red. Its name appears to be a portmanteau of "Stal" (a prefix used for several skeleton enemies, such as Stalfos) and "lord". 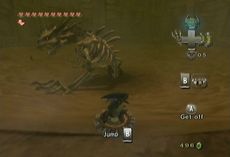 The first phase of battling Stallord in the Wii version

In The Legend of Zelda: Twilight Princess, when Link enters the boss room, he finds the remains of Stallord lying in a large pit of sand. Zant teleports into the room, standing in front of Link, sticks the Scimitar of Twilight into Stallord's skull, and then vanishes. Stallord's pupils start to glow red, then it gets up, and roars at Link.

The battle starts, and Stallord summons Staltroops out of the quicksand. They surround Stallord and protect him from taking damage. Stallord attempts to spit blasts of dark fire at Link. He must equip the Spinner and ride it along a long, circular rail attached to a platform surrounding a large pit of quicksand. Link must avoid being hit by the Blade Traps that move around the rail. To attack Stallord, Link must jump off the rail with his Spinner and charge into Stallord's vertebrae. Each time Stallord is hit, the lowest vertebra breaks off, causing Stallord to sink lower into the quicksand. When Stallord is hit three times, it falls over, its eyes stop glowing, and its whole body sinks with the quicksand through the floor at the very bottom of the pit. Stallord's head remains on the floor.

The second phase of the battle starts when Link inserts the Spinner into a slot and rides it. Part of the platform then rises up, revealing it to be a tall, circular column. Stallord's head awakens and levitates in the air, and then it charges at Link, knocking him back down below. Link must take out the Spinner and ride on parallel sets of rails that spiral around the tall column. There are parallel sets of rails on the adjacent wall. After a while, Stallord's head appears hovering in front of the column, and it spits out a large, regular fireball. To avoid the fireball, Link must jump with the Spinner to the adjacent set of rails. Stallord's head follows in front of Link as he moves between rails. Each jump takes Link slightly closer to Stallord's head but also lowers him. If Link jumps too many times, he returns to the floor.