Lizalfos may be a successor of Daira and Gēru, humanoid reptile enemies in Zelda II: The Adventure of Link. Lizalfos have a less common variant, Dinolfos, which is consistently depicted as stronger, though specific details vary. 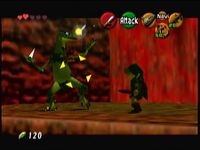 Link fighting a Lizalfos in Dodongo's Cavern in The Legend of Zelda: Ocarina of Time

In The Legend of Zelda: Ocarina of Time, Lizalfos are uncommon dungeon enemies. Link encounters two pairs acting as tag teams in two portions of a large, lava-filled room of Dodongo's Cavern, both of which are the mini-bosses. These Lizalfos often take turns while fighting Link, because taking after a number of hits, the Lizalfos hops to the next platform, leaving the other Lizalfos to attack Link. Both Lizalfos in the pair are defeated after Link strikes them with his sword several times. Two generic enemy ones that are not in a team setup later appear in the Spirit Temple, individually dropping from the ceiling in one room. Lizalfos are more common in the Master Quest, appearing in places such as Lord Jabu Jabu's Belly, the Fire Temple, and the Water Temple; in these instances, they always use the unlinked "fall from ceiling" behavior.

During combat, Lizalfos frequently make high-pitched yips and jump around the room. Lizalfos carry a sword with them, and they can jump over Link's head and strike him from behind. Link can temporarily stun a Lizalfos by either throwing a Deku Nut or by using his shield to block their attack.

In The Legend of Zelda: Twilight Princess, Lizalfos have a more theropod-like appearance, and they are slightly bulkier and have dark-scaled skin. Lizalfos are more common than in The Legend of Zelda: Ocarina of Time. Lizalfos appear in several dungeons, including the Lakebed Temple, the Temple of Time, the City in the Sky, Hyrule Castle, and the Cave of Ordeals. They only appear in one overworld area, Hyrule Field. The game also introduces a similar, aerial enemy, Aeralfos.

Several Lizalfos are clad in a thin leather loincloth and various tribal jewelry. They are typically armed with scimitar-like swords, squared bucklers, and an axehead attached to the end of their tail. Some variants wear a skull mask and bone jewelry. Link can defeat a Lizalfos by firing a Bomb Arrows or by using one of his Hidden Skills. Some Lizalfos make a low growling noise when attacked or defeated. When shot with arrows, the arrows stick in their skin instead of disappearing.

The Legend of Zelda: Skyward Sword[edit]

In The Legend of Zelda: Skyward Sword, Lizalfos are uncommon enemies usually fought in pairs, found in places such as the Lanayru Shipyard. They now have spiky orange crests, a spiked ball on the ends of their tails, and powerful gauntlets they use both to attack and defend. Link must swing his sword in ways that will not hit their arm guards. When defeated, their tails fall off and shrivel up (similar to a real lizard's) and can be collected. A venomous variety known as Dark Lizalfos also appears.

The Legend of Zelda: Breath of the Wild[edit]

In The Legend of Zelda: Breath of the Wild, Lizalfos are a common, medium-strength enemy. They have been redesigned to resemble chameleons, and like chameleons can change colors to mimic their surroundings. They do this while crouched to the ground, leaving nothing but a conspicuously-shaped lump. On rare occasions, they may also do this on walls. They also assume this position while sleeping. Aside from this, Lizalfos are commonly found swimming, and will spit out blasts of water as an attack. They also use this attack if Link is too high to reach. However, if there is a path to where Link is, they will dash up to him in a few seconds, even if the path is long and non-direct. As such, running away from Lizalfos can be difficult. If he is close and they lack weapons, Lizalfos will use their extending tongues to hit him. By wearing the Lizalfos Mask, Link can disguise as one, prompting them to attempt conversation with him.

Unlike other humanoid enemies, Lizalfos' primary cutting weapon is a boomerang called the Lizal Boomerang, though they rarely throw it. Stronger varieties of this add more blades to it. The rest of their equipment is also generally metallic, such as the Lizal Spear, Lizal Bow, and Lizal Shield. As such, they are usually weak to electricity based weapons.

When defeated, Lizalfos may drop Lizalfos Talons, Lizalfos Horns, or Lizalfos Tails, depending on strength. The elemental varieties drop their own types of tails.

In Hyrule Warriors, Lizalfos use a design most similar to their The Legend of Zelda: Ocarina of Time one with an armored gauntlet comparable to the ones from The Legend of Zelda: Skyward Sword, though early trailers simply used the design from the latter game. They are the first non-character enemy captain to be fought, appearing early in the Forces of Ruin, the first mission. They are capable of uppercuts and fire breath, though strong attacks expose them for a Weak Point Smash. Dinolfos appear as their stronger counterpart.

In Ganondorf's Return, Ganondorf recruits several Lizalfos from Gerudo Desert, showing they are capable of speech, albeit with a snake-like hissing and somewhat broken wording. In the Cia scenario "The Dragon of the Caves," they are led by a larger Lizalfos Chieftain, who has more prominence in Hyrule Warriors Legends.

In Hyrule Warriors: Age of Calamity, Lizalfos use their design from Breath of the Wild, appearing in green, blue, black, and silver, alongside the skeletal and elemental varieties. They are no longer captains, instead being infantry troops. They are stronger and more durable than Bokoblins, and like them are often in small groups led by a slightly larger member of the species. Unlike Bokoblins, these ones never blow horns to signal attacks, with this instead being marked with a red gleam over the eyes. Additionally, if not wielding bows, they can spit out water, with the elemental ones having alternate attacks. They only rarely camouflage themselves. Sometimes, an outpost will be led by a giant Lizalfos, which acts similar to a captain in that it has a Weak Point Smash meter and attacks that can be annulled with runes.

Cadence of Hyrule: Crypt of the NecroDancer featuring The Legend of Zelda[edit]

In Cadence of Hyrule: Crypt of the NecroDancer featuring The Legend of Zelda, Lizalfos appear as common troops, using a new design similar to Daira. They appear in a wide variety of colors, with the green, orange, and white ones wielding swords and the blue, black, and purple ones wielding spears with more reach. Lizalfos stay still until the player character crosses their x- or y-axis, at which point they charge at them, moving one space per beat until they hit the player or an obstruction. Attacking them as they charge can cause them to stop and drop their guard, and they can also be attacked by moving to the side and hitting them as they pass, which also turns them in the direction the player is facing. Attacking a spear from the side just causes the Lizalfos to turn without being damaged, however. Their behavior is taken from the Armadillo enemy in the original Crypt of the NecroDancer.

In the future Hyrule, new types of Lizalfos are introduced. These are Camouflage Lizalfos, which turn transparent aside from their outline and can come in the same colors as well, and a dark green type called the Broadsword Lizalfos.