Ghinis are ghost enemies that usually have a single eye and a large tongue. They first appear in The Legend of Zelda and have since appeared in other fixed-camera The Legend of Zelda titles. In most of their appearances, Ghinis are hiding beneath a tombstone in a graveyard or cemetery. Sometimes, if Link touches a tombstone, a Ghini comes out and starts flying around the area. Ghinis require many hits to be defeated. They are often used interchangeably with Poes.

In The Legend of Zelda, Ghinis appear in the graveyard found across the Lost Woods. Each square has one Ghini moving around, and more appear if Link pushes into any of the gravestones, with some gravestones spawning multiple Ghinis in succession. They simply move in any of the cardinal directions fairly slowly. If multiple Ghinis are on-screen and Link kills the first to appear, they will all be defeated simultaneously. Otherwise, the later ones are invincible. In unused graphics from the game's prototype, they are depicted with a pair of legs and an angry eye instead of a tail with a neutral eye.[1] This sprite also appears in the manual in all regions and is likely the basis for the artwork, hence why it has two eyes.

In BS Zelda no Densetsu, Ghinis now resemble their artwork, but with empty pink eyes.

The Legend of Zelda: Link's Awakening[edit] 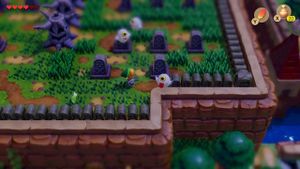 Link encounters a few Ghinis in the cemetery in the Switch remake for The Legend of Zelda: Link's Awakening

In The Legend of Zelda: Link's Awakening, Ghinis are only found in the cemetery. They are always shown sticking their tongue out, a trait they would keep in following games. They swoop around the graveyard at Link in a similar manner to Poes in The Legend of Zelda: A Link to the Past. Once again, defeating the first to appear destroys all other visible Ghinis, but the others can now be destroyed by themselves as well. One particular gravestone houses a Giant Ghini, which aside from being larger, takes many more hits.

The Legend of Zelda: Oracle of Seasons[edit]

In The Legend of Zelda: Oracle of Seasons, Ghinis appear in the graveyard housing the Explorer's Crypt. They act like the ones in Link's Awakening. A linked game includes a Ghini character with a green tongue, who if told the Graveyard Secret, will start a minigame where Link needs to keep track of a large number of red- and blue-tongued Ghinis and remember which there is more of. If Link passes enough rounds, he gives him a Heart Container to make him stronger. A red-tongued one on the Western Coast tells Link the Library Secret, which ends with a shield upgrade.

The Legend of Zelda: Oracle of Ages[edit]

In The Legend of Zelda: Oracle of Ages, Ghinis appear in the Spirit's Grave and the Ancient Tomb, with the former dungeon having only one generic Ghini. It also has a Giant Ghini for a mid-boss, which attacks alongside two smaller Ghini known as Bunshin. In the latter dungeon, groups of Ghinis appear, but due to all appearing at once, they must all be defeated individually. In Yoll Graveyard, a trio of Ghinis appear harassing Moosh as a sort-of miniboss, and In a linked game, a friendly Ghini here gives Link the Graveyard Secret.

The Legend of Zelda: Four Swords[edit]

In The Legend of Zelda: Four Swords, Ghinis are green-tinted with dark eyes, and appear only in Vaati's Palace. They latch onto Links that approach them in order to drain their health. They no longer link to each other health-wise in any way.

In The Legend of Zelda: Four Swords Anniversary Edition, Ghinis also appear in the Realm of Memories and the Hero's Trial.

In The Legend of Zelda: Four Swords Adventures, Ghinis fly back and forth while winking their eyes, leaving behind a trail of light blue afterimages and giving off a soft light. They can be defeated in one hit, but will sometimes turn invisible to avoid this. When defeated, they release a deep moan overlaid with a high-pitched wail (recycled from Poes in The Legend of Zelda: The Wind Waker), then become a spiritual ball of blue flame, which winds away before dissipating. They first appear in a graveyard in the Swamp. A huge swarm of Giant Ghinis surrounds Dampé's house to the north of that, but they disappear when some torches are lit. Later, many more Ghinis may appear in the level if the Links are seen by searchlights. Some are also spawned by the Big Poe boss in the same level and can be defeated with torch light. They later appear in dark areas of the next level, Infiltrating Hyrule Castle. They behave the same as before but sometimes hide in pots. They then assist the second iteration of Big Poe in its fight. They finally appear in a blizzard in Frozen Hyrule.

Of note is that the official Japanese guide misidentifies them as Poes, likely due to the two Poe bosses they assist.

The Legend of Zelda: The Minish Cap[edit]

In The Legend of Zelda: The Minish Cap, Ghinis are found in Royal Valley, where they are commonly found asleep before Link approaches. When they see him, they will go after him and attempt to capture him between their tails, after which they will lick him repeatedly to damage him. He can escape by struggling enough. A pink female Ghini named Gina resides under one of the gravestones and offers to fuse Kinstones with Link if he visits.

The Legend of Zelda: A Link Between Worlds[edit]

In The Legend of Zelda: A Link Between Worlds, Ghinis appear in the Dark Palace, where they are found in two colors. The white Light Ghini is most visible when the room is well-lit, and the black Dark Ghini is when the room is dark. They both can be attacked regardless of the lighting, however. This is notably the first game where both Ghinis and Poes appear as generic enemies.

In The Legend of Zelda: Tri Force Heroes, Ghinis appear in their light and dark colors again, but not by name. The dark ones appear in the Ruins area and the light ones appear in the Sky Temple area. Both act as they do in A Link Between Worlds, and can be found on their respective area's floors in the Den of Trials.

In both Link: The Faces of Evil and Zelda: The Wand of Gamelon, Ghini[2] appear as enemies in haunted- or ruins-themed areas. They appear as ghostly old men with yellow or green skin and wiry white hair, and float after Link and Zelda in their respective game.

In Hyrule Warriors and its rereleases, Ghinis with their original sprite appear as the Adventure Mode icon for Big Poes. Icy Big Poes use a darker version of it.