Moldorms are large versions of Mini-Moldorms that debut in The Legend of Zelda: A Link to the Past. Like their smaller counterparts, they move around erratically. They generally try to push Link off platforms to lower floors, and have a weak spot on the end of the tail.

In The Legend of Zelda: A Link to the Past, a Moldorm debuts as the boss of the Mountain Tower, where it is on a small platform with a hole on the left side on the highest floor. When its tail end is hit, it flashes and temporarily stops as its eyes roll around. If Link hits its head, however, his sword will ricochet off it and he will be pushed back a large distance. The more damage it takes, the faster it moves, though Link can use a Spin Attack to deal even more damage. If Link is knocked into the pit, he goes down to the previous floor, and returning starts the battle from the beginning. After six normal sword strike's worth of damage, the Moldorm is defeated and Link gains the Pendant of Wisdom.

One later appears on a larger, vaguely bat-shaped platform on the 6th floor of Ganon's Tower, and tries to push Link into a pit with patches of spiked floor, an Anti-Faery, and a Wizzrobe. However, since Link has better equipment at this point, the battle can be completed quicker. Once this Moldorm is destroyed, a Treasure Chest containing a red Rupee appears on a nearby platform as a Hookshot target, allowing Link to continue to Agahnim on the 7th floor.

The Legend of Zelda: Link's Awakening[edit] 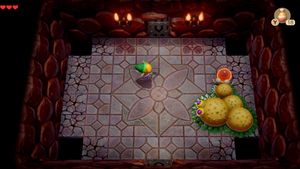 Link battling Moldorm in the Nintendo Switch remake of The Legend of Zelda: Link's Awakening

When Link enters the room, the Moldorm buzzes, acknowledges Link as an "outsider," and moves around in random directions. Like the previous game, Link can attack Moldorm by striking its tail with his sword. With each hit, Moldorm moves around faster and more erratically. Link can avoid Moldorm by using the Roc's Feather to jump over it, or by holding out his shield, which deflects Moldorm. There are two pits on both sides, which Link must avoid falling or being pushed into by Moldorm. If this happens, Link falls into in a side-scrolling dark area and must climb out of it from a ladder to return into the main area. Link can return to fight Moldorm, although this restarts the battle. By using the Whirling Blade technique, Link can defeat Moldorm after four hits. When Moldorm is defeated, Link is rewarded with a Heart Container, and he can then enter into the room with the Full Moon Cello.

During the final boss fight against the Shadows, one of the forms they take is that of a Moldorm, also known as Moldorm's Shadow, with the Shadows' angry eyes on its tail end.

In the Nintendo Switch remake, Moldorm and its fight are changed a bit. It looks like the Moldorm in A Link Between Worlds, but has a group of petal-like protrusions around its tail end, which it can close to protect it. Before the battle begins, it falls from the ceiling with only its head visible before saying its line. It also turns more and more red the more it is hit. Finally, the pits to the sides have, aside from the corners, been replaced with collapsing floors.

The Legend of Zelda: The Wind Waker[edit]

Moldorms do not appear in The Legend of Zelda: The Wind Waker. However, the third and final form taken by Puppet Ganon is both visually and behaviorally based on one.

In The Legend of Zelda: Four Swords Adventures, a Moldorm appears in the pyramid and is called Big Moldorm.[1] It is gray and its tail end changes color depending on which Link needs to hit it. After each hit, it cycles through the possible colors like a roulette before eventually stopping on another. If it takes too long for a Link to hit it, it may do this by itself. After four hits, it splits in two. One of the two can be defeated in two hits, while the other takes six Upon having only one hit left, each will become much faster and more aggressive. When they are both defeated, the Links are able to free the final maiden. Ordinary Moldorms resemble the boss's appearance from A Link to the Past.

The Legend of Zelda: A Link Between Worlds[edit]

In The Legend of Zelda: A Link Between Worlds, a Moldorm again is the boss of the Tower of Hera, where it is yellow with several lumps on its top and a green fuzz around the rim along its underside. It now has the Pendant of Power and is fought on a similar platform to in A Link to the Past, albeit made of metal grating and over the roof. If Link is knocked down to the roof, he can return to the arena using a mole and does not need to start over. This Moldorm takes seven normal hits to defeat, and turns more red as it speeds up, turning orange after three hits and red after two more. If Link uses the hammer near it, it is bounced into the air one segment at a time and and momentarily stunned.

A stronger, purple one with undulating yellow and purple eyes can be found in Lorule Castle. This one is fought at the end of the bomb challenge through the lower left boss fight door, and instead of pits in its arena, it has walls that push closer together, thus shrinking the arena. Both appear in the Treacherous Tower, with the Hyrule version being the final opponent in the intermediate mode and the Lorule version being the final opponent of the advanced mode. Both are surrounded by pits here.

In The Legend of Zelda: Tri Force Heroes, a Moldorm appears as the boss of the Fire Temple with a design uncharacteristically resembling a Trilobyte or a horseshoe crab. Its arena is over a large bit of lava, and lava geysers erupt from three marked circles on the mesh floor. The glow from its large red headlight-like eyes indicate which Link needs to attack it, depending on their color. In single player mode, it also indicates which Link it will attack and will always be the color of the Link being controlled, though if the controlled Link is off the battlefield, the eyes will glow yellow and it will wander aimlessly. As it moves, it slowly unfurls its segments, ending with the weak tail end, the last of which will only appear if it is actively pursuing a Link.. Hitting a Link or switching between Doppels in the arena will cause it to withdraw its segments, thus starting the process over. Its tail end can be hit by throwing the boomerang, luring it away from it while holding the boomerang in place, and then letting it return while Moldorm's tail is between the boomerang and Link. After it takes three hits worth of damage, it will raise its weak tail, necessitating either a totem position or a ranged attack from one of the raised platforms to the side of the battlefield. After three more hits of damage, it will begin moving faster while blinking red.

After three further hits, it will raise its tail again, meaning that either all three Links will need to totem or two will need to totem on one of the side platforms. Additionally, it will start moving more erratically while its eyes flash between all three colors, and it simply runs between edges while repeatedly unfurling its segments, regardless of whether an active Link is on the field or not, and withdrawing them every time it reaches an edge. After one more hit, it is defeated.

Later, one of the Drablands Challenges involves completing the Fire Temple (including the Moldorm fight) with only Bombs as a weapon, including a lack of Swords. In the Fortress, the middle of The Lady's Pets acts as an altered version of Moldorm.

The Legend of Zelda: A Link to the Past (comic)[edit]

In the comic adaptation of The Legend of Zelda: A Link to the Past by Shotaro Ishinomori, Moldorm appears in Chapter 4. It is depicted as a giant black spider with an image resembling a distorted black skull on its back and several hexagonal yellow eyes at the front. Link stabs the second eye, but then receives a telepathic message that the Pendant of Wisdom is behind the creature's third eye. He reaches through as though it were a liquid and pulls it out, after which Moldorm rapidly descends down its thread back to the entrance, allowing Link to leave. In Chapter 11, the Moldorm, along with Agahnim and the Lanmola, are shown as ghostly apparitions in Ganon's Castle. Link and Roam destroy them all.

In BS Zelda no Densetsu Inishie no Sekiban, Moldorm is the boss of the second dungeon, the Waterfall of Wishing. It looks and acts like it does in A Link to the Past, except falling in the pit resets Link to the boss room's door, making the fight significantly easier than normal as falling does not start the whole fight over.

The Legend of Zelda: A Link to the Past manga[edit]

In the manga adaptation to the Game Boy Advance version of The Legend of Zelda: A Link to the Past by Akira Himekawa, Moldorm appears as a giant centipede.

This section is a stub. You can help Triforce Wiki by expanding it.