In The Legend of Zelda: A Link to the Past, Kakariko Village, also known as Kakariko Town, is located in the mid-western part of the Light World, south of the Lost Woods. At one point, the Loyal Sage of the Sanctuary asks Link to find the wise man Sahasrahla, who is the elder of Kakariko Village. Link can obtain two Pieces of Heart, two Magic Bottles and the Bug-Catching Net from here. Kakariko Village has an inn, a shop, and the Mysterious Hut.

When Link arrives at Kakariko Village, he can inquire about Sahasrahla to the local resident. Some of them believe that Link kidnapped Princess Zelda. If Link talks to these residents, they yell for the Soldiers to capture Link, who must fight them off. This is where Link can find Sahasrahla's grandson, who reveals that Sahasrahla relocated to Eastern Palace by marking his location on the overworld map. Later, after Link retrieves the Master Sword, Kakariko Village becomes overrun by guards.

Many optional side-quests can be completed in Kakariko Village, but it is also the site of the duck sealed within the Weathervane that Link needs to awaken with the Flute. After doing so, the duck within the statue is released. Kakariko Village is one of the eight places that the duck can transport Link to if he plays the Flute to summon it.

The Dark World equivalent of Kakariko Village is the Village of Outcasts, which is overrun with thieves, gambling establishments, and Moblins. The Weathervane is replaced by a Gargoyle Statue.

A view of Kakariko Village in The Legend of Zelda: Ocarina of Time

Kakariko Village was created and inhabited by the Sheikah long ago. Villagers there recall that Impa opened Kakariko Village to the poor commoners of Hyrule some time ago. They also claim that Impa drove out the Gerudos from the area. A windmill dominates the landscape and is used for drawing water up from the Well of Three Features, which is the source of water for the residents of Kakariko Village.

When Link learns the Song of Storms, playing it can overwork the windmill, causing all the water to draw up and empty the well. Another legend tells that a wise man with an eye that could see the truth lived where the well is located; playing the Song of Storms opens up the well for Link to explore as a child to find the Lens of Truth.

During Link's adulthood, several people who lived in Hyrule Castle Town took refuge in Kakariko Village. Talon is also found in the village after Ingo kicks him out of the ranch. There is an evil being that escapes (later revealed to be Bongo Bongo), sets fire to the village and retreats into the nearby Shadow Temple.

Before Link pulls the Master Sword, it is revealed that Impa wanted Kakariko Village to be constructed into a "true city" and hired carpenters for this task. When Link is an adult, the carpenters are gone and only one building was made, the Hyrule Shooting Gallery.

Kakariko Village appears as the second stage of the fifth level of The Legend of Zelda: Four Swords Adventures, the Dark World. Visually, it is more based on the Village of Outcasts, using updated versions of the same graphics and filled with thieves. There are also many fires, set by Shadow Links carrying Fire Rods. Due to the Links' resemblence to Shadow Links, many of the villagers are suspicious of them, but request that they put out the fires before they leave. The sixth volume of Tingle Times is located at the entrance, where Tingle fumes that all his Force Gems have been stolen behind his back and asks someone to beat up the thief who took them. Most of Kakariko Village's typical traits, including its music, are given to the Village of the Blue Maiden. Kakariko Village itself uses the "Hidden Mountain and Forest" music from A Link to the Past, switching to the introductory reel music for both games once the rain starts.

When the Links first arrive, Kaepora Gaebora flies in and warns them that the darkness has corrupted the village and many of its inhabitants, and they tell him that the White Maiden asked them to guard the Dark Mirror held in the Temple of Darkness. He agrees that they are trustworthy to guard it, and flies off to look further around Hyrule to keep stock of things. When the Links enter the are required to capture all ten thieves in order to advance north of the city. Several of the thieves are well-hidden and require particular items to reach; some require a Power Bracelet to reach, which can be obtained by bringing a Cucco to a lonely old widower. Once Link travels to the northern section, he must navigate a maze filled with fire as well as an aggressive Chain Chomp in the middle. Further north is a place where they can summon rain by lighting some torches and thus quell the fire. This opens a few optional areas, such as the house of an ill person who thanks the Links with several Force Gems and a small body of water where they can feed fish to a hungry Zora for a Heart Container. Outside the village is a river filled with waterfalls, spiked objects, rapids, and hostile Zoras, with Force Gems and Force Fairies floating above. At the end of the river is a fight with a Big Dark Stalfos assisted by two grey Sword Soldiers. When the Links defeat it, the spirit of the Green Knight is freed and they recover the Green Royal Jewel, while the path to the temple opens. 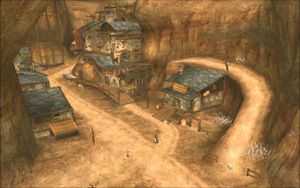 A bird's-eye-view of Kakariko Village in The Legend of Zelda: Twilight Princess

By the time Link reaches Kakariko Village, several of its inhabitants have transformed into Shadow Beasts. The only characters who were not are Renado, his daughter Luda, and Barnes. The houses that line the path to Death Mountain are uninhabited and in severe disrepair, possibly due to the Shadow Beasts' attack. After Link saves Darbus, Gorons come down to the village to help Link reach higher areas of the valley.

The Hidden Village has a billboard with Hylian text that translates to "Welcome to Old Kakariko", which suggests that the place is a Kakariko Village from an earlier game.

This section is a stub. You can help Triforce Wiki by expanding it.

The Legend of Zelda: Breath of the Wild[edit]

In The Legend of Zelda: Breath of the Wild, Kakariko Village is a bustling village located in the south-west mountain region, north of the Dueling Peaks and immediately east of Lantern Lake. It is one of the few communities that was left unharmed by the Great Calamity due to the mountainous terrain. King Rhoam instructs Link to go to the village to meet Impa, so the player usually goes there early in the game. The Ta'loh Naeg Shrine is located on the northern outskirts of the village, and a passage in the north-east section leads to a Fairy Fountain.