The Helmaroc King, also known as the Helmasaur King is a large creature wearing a strong mask that can be broken with enough hits from a Hammer. It has appeared both as a large Helmasaur and a large Kargaroc in different games with different names but they are officially considered different interpretations of the same entity.[1]

The Helmasaur King first appears in The Legend of Zelda: A Link to the Past where it is the boss of the first Dark World dungeon, the Dark Palace. It appears in a large room with two rows of three Traps in the back of the room. It attacks by swinging its spiked tail around the room, walking around the room, and breathing splitting fireballs. Using the Hammer or Bombs on its mask repeatedly will chip and later destroy it, revealing its face underneath. Its face has a large green gem on the forehead that can be hit with any attack to hurt it. After getting hit several times, its tail will explode. After its tail explodes its body explodes, defeating it and making it drop a Heart Container. Once it is defeated, Link acquires the first Maiden-containing crystal.

In A Link to the Past/Four Swords, an alternate, stronger, green version of the Helmasaur King is in the new Palace of the Four Sword. It appears in a large room with five Traps in the top corners of the room and three traps in the bottom corners of the room. Its battle has minor differences from its battle in the Dark Palace. After the mask is destroyed, instead of fireballs, he will spawn Helmasaurs to attack Link, and once the gem is damaged enough, the mask will repair itself. After it is destroyed again, the gem's place will instead be taken up by a large third eye, resembling that of Vitreous. In this battle, the gem cannot be damaged by arrows, but the eye will be immediately destroyed if hit with a Silver Arrow.

The Legend of Zelda: The Wind Waker[edit] 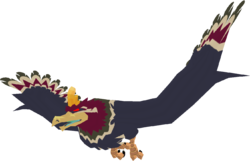 Reimagined as a large bird, the Helmaroc King appears in The Legend of Zelda: The Wind Waker, acting more directly as Ganondorf's minion. During the game, it steals maidens from across the Great Sea, with Ganondorf hoping to find the current iteration of Princess Zelda. It manages to pursue the correct one, Tetra to Outset Island, but from there instead grabs Link's sister Aryll, starting Link's quest. While exploring the Forsaken Fortress where Aryll is imprisoned for the first time, the Helmaroc King can be seen in a giant nest throughout. Once Link climbs to the holding cell, the Helmaroc King grabs him, shows him to Ganondorf, and then tosses him away at his orders.

The roof is a circle surrounded by spikes. In the battle, the Helmaroc King can fly or stomp around the roof and attempt to crush, peck, or blow Link into the spikes around the roof. Whenever it pecks, its beak will get stuck in the ground, allowing Link to use the Skull Hammer on his mask, damaging it, and causing the Helmaroc King to retract its beak and scream. Once the mask is destroyed, he is shown having red eyes and a yellow crest. Now, it no longer retracts its beak immediately upon being hit, and the hammer can do huge amounts of damage to it. Hitting it enough times further will defeat it, causing it to scream, stumble, fly high into the air, and explode as the searchlights cross over it, dropping a Heart Container.

As shown by the health bar displayed by the Hero's Charm, the Helmaroc King is not damaged at all until the mask is destroyed. Additionally, unlike other bosses working for Ganondorf, it is not encountered in the boss rush in Ganon's Tower.

The Helmaroc King reappears as a boss on The Mountain Path in The Legend of Zelda: Four Swords Adventures. When the players enter its room it swoops down towards the players before the battle. On the bridge before the battle, the Helmaroc King's shadow can be seen flying by. The Helmaroc King's room has Bomb Flowers and two caves. Each cave contains a Keese, two ladders, and a Hammer, and the cave on the left also contains a tablet that gives the player a hint on how to defeat the Helmaroc King. In its battle, it swoops around and drops rocks. Bombs must be used to knock it out and make it fly into the side of a cave, where its head appears on the Game Boy Advance screen inside the cave where it can be damaged with the Hammer. After getting hit enough its mask breaks, making the Helmaroc King attack by swooping down to the ground level. In this state, it does not go into the caves after getting hit by a Bomb and the swords can be used to damage it. After getting hit enough it will explode, defeating it. Unlike the graphics of most entities in the game, which are made from scratch or edited from previous sprites, the Helmaroc King uses pre-rendered sprites of its model from The Wind Waker.

The Legend of Zelda: Phantom Hourglass[edit]

The Helmaroc King does not directly appear in The Legend of Zelda: Phantom Hourglass. However, an item called a Helmaroc Plume appears as a treasure, with the description saying it was dropped by "the mythical Helmaroc" when collected and "a Helmaroc bird" on the collection screen, suggesting a species.

The Legend of Zelda: A Link to the Past comic[edit]

In the comic adaptation of The Legend of Zelda: A Link to the Past by Shotaro Ishinomori, multiple copies of the unmasked Helmasaur King appear in Chapter 7 and are called "Gleeocks." Rocklops #1 sends them after Link after it catches him attempting to blow up the Palace of Darkness by igniting the Firecorn stockpile within. One manages to catch up to Link after he reaches the maiden, but Link manages to detonate the stockpile anyway, destroying all the monsters.

The Helmaroc King appears in the new The Wind Waker-inspired chapter as a boss and is again weak to the Hammer. It is capable of the same attacks it can do in The Wind Waker, though some have been adjusted to fit the new gameplay style and battlefield size. It can now fire large amounts of its feathers as blades and turns slowly while doing so.

In the story, it first appears in the Forsaken Fortress in "A New Disturbance," where it is run out of the fortress by monsters and repeatedly attacks Windfall Island, but always flees before it can be properly defeated. Later, it appears in Gerudo Desert in "The Search for Cia," where it is defeated.