It has been requested that one or more images be uploaded and added to this article. Remove this template once the image(s) has/have been uploaded and applied. 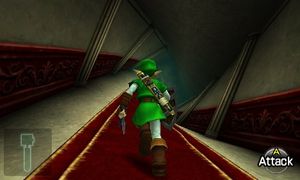 Link walks down a twisted hallway in The Legend of Zelda: Ocarina of Time 3D.

In The Legend of Zelda: Ocarina of Time, the Forest Temple is the first of five temples that adult Link must complete in order to awaken the five remaining Sages. The Forest Temple is found deep within the Sacred Forest Meadow. It can only be accessed by using the Hookshot since the entrance stairs are in ruins. Before he accesses the Forest Temple, Link learns the Minuet of Forest from Sheik.

The Forest Temple has two floors and two basement levels. There are two courtyards in the back. Inside the Forest Temple is two twisted hallways, allowing Link to enter the rooms beyond at a different orientation.

The main item found in the Forest Temple is the Fairy Bow, which Link gains after defeating three Stalfos. The mini-bosses are the four Poe Sisters, Joelle, Beth, Amy, and Meg, and Link must make use of his acquired Fairy Bow to attack them. The mini-boss theme plays while fighting sets of two and three Stalfos respectively despite them being regular enemies. Phantom Ganon is the boss fought at the end of the Forest Temple. By defeating him, Link frees the first Sage, Saria. 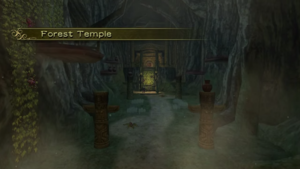 Title card for the Forest Temple

In The Legend of Zelda: Twilight Princess, the Forest Temple is the first dungeon. Prior to obtaining the Ordon Sword, Ordon Shield, and the Hero's Clothes, Link cannot reach the Forest Temple because its entrance is blocked off by a large rock. Once Link has the three items, the rock is somehow replaced with a spider web, which Link must burn using his Lantern so that he can enter a tunnel that leads him directly into the Forest Temple.

During the first half, Link explores the east and west regions of the Forest Temple, where he rescues some imprisoned monkeys who help him get through the dungeon. In total, there are eight monkeys to rescue. The first monkey whom Link rescues is a female monkey, who is found in the first room. After being rescued, she directs them towards her chief, Ook. However, Ook has lost his mind to a parasite attached to his head. Just as the monkey is crossing the bridge leading to Ook's chamber, Ook appears and destroys the bridge, forcing her to go back. Along the way, Link must rescue four more monkeys before he can reach the mini-boss's chamber. The rescued monkeys help Link in certain rooms by allowing him to swing across gaps and pointing out the direction to the next room. To progress, Link must make use of Bomblings, use both his Lantern and Slingshot, climb up vines, and even roll.

Ook is the mini-boss of the Forest Temple, and he can be attacked from Link's rolling attacks. When Link defeats Ook, he obtains the dungeon's main item, the Gale Boomerang. With it, Link can reach more treasures in previous rooms by either extinguishing torches, by releasing objects from webs, or by activating wind propellers. Ultimately, this allows Link to progress further into the Forest Temple.

Link finds the fifth imprisoned monkey on the way back to the first room. As Link heads north, he can find a Piece of Heart, the dungeon's Compass, and the Big Key. The last three monkeys must be rescued to reach the boss chamber at the end. Link must use the Gale Boomerang to rescue the monkeys. Once all eight monkeys have been rescued, all of them relay in the final room to form a long swing that allows Link to reach the boss door. It leads into a room where Link battles Diababa, whom Link must defeat to obtain the first Fused Shadow.

If Link re-enters the Forest Temple after clearing it the first time, he must instead use the Clawshot to traverse the dungeon because the monkeys are no longer there to help him.

The Legend of Zelda: Spirit Tracks[edit]

In The Legend of Zelda: Spirit Tracks, the Forest Temple is the dungeon for the Forest Realm. To reach it, Link needs to brave the Lost Woods and play a song with the Lokomo Gage. The temple itself is filled with poison fog, which can be cleared away with the Whirlwind item featured in it.